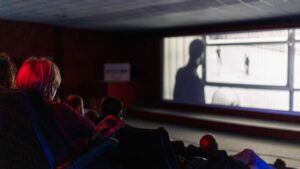 The fourteenth edition of Magma – Mostra di cinema breve takes place in Acireale from 25 to 28 November 2015.

The festival starts with a masterclass by Michelangelo Frammartino focused on the need to get to co-exist – in the same film, in the same frame, at the same time – fiction and documentary, absolute control and wild contingency, the rigid screenplay format and improvisation, the awareness of a real actress and the pure animal instinct. “Beauty and the Beast”, this is the name of the workshop, takes place in the days of 25 and 26 November at Bellavista.

After an opening ceremony in the afternoon of Thursday 26, the International Competition starts at Margherita Multisala.

In the afternoon of Saturday 28, at Teatro Auditorium ex Angolo di Paradiso, together with Antonio Sichera and Alessandro De Filippo we remember Lorenzo Vecchio, founder and first artistic director of Magma, ten years after his death with a meeting called “I’ve got Story fever”.

The Lorenzo Vecchio Award, the Festival Grand Prix, went to the Estonian animation Papa, by Mari-Liis Bassovskaja e Jelena Girlin. ‘For the organic combination of storytelling and artistic direction of puppets’ the Jury explained, with reference to the Estonian animation characterised by various techniques, including stop motion, pixilation and live action.
The jury bestowed a special mention to the cast of the narrative short Deus in Machina, an Italian and Estonian coproduction directed by Nicola Piovesan. ‘For the successful balance between easygoing self-irony and talent peculiar to the best Italian comedy tradition’: this is the motivation with which the Jury awarded the four actors Daniele Ferretti, Vincenzo Muià, Orfeo Orlando and Venantino Venantini. The Audience Award went to the German animation Automatic Fitness, by Alejandra Tomei and Alberto Couceiro.

The Jury is chaired by the Italian director Michelangelo Frammartino and composed of the Slovak Žofia Bosáková, the Fest Anča festival director, and Tsanko Vasilev, the In The Palace International Short Film Festival director (Bulgaria).

Two special programmes will be focused on two foreign festivals, in the presence of their festival directors: Fest Anča International Animation Festival (Slovak) and In the Palace International Short Film Festival (Bulgaria). The partnership with Fest Anča has led to a new, fruitful collaboration: the programme of ten Italian animations presented by Magma in Žilina was also part of the rich lineup of events included in Dolce Vitaj, the Italian festival organised in Slovakia last June by the Italian Cultural Institute in Bratislava. A unique insight into the best of Italian culture, ranging from contemporary art to drama, from literature to music, cinema and food. Along with the celebrations for the 750th anniversary of the birth of Dante Alighieri and a tribute to Pier Paolo Pasolini, as well as Vivaldi’s classical music and Vico Magistretti’s design, the best of contemporary animated cinema was showcased.  The collaboration with the Italian Cultural Institute in Bratislava headed by Antonia Grande goes on also with the 2015 edition of the Mittel Cinema Fest, the most important event focused on the promotion of Italian cinema across central Europe, presented by Istituto Luce Cinecittà in partnership with the Italian Cultural Institutes in Budapest, Krakow, Warsaw, Bratislava and Prague.